London is the cosmopolitan heart of England and visitors to the city will be overwhelmed with the fantastic array of eateries and styles of cuisine available to suit all tastes and budgets. Whether you are staying in hotels or holiday apartments London will not be a disappointment to you.

At present, there is a true celebrity chef culture, promoted by television cookery series, competitions such as Great British Menu and Masterchef and cookery books. If you would like to sample the fare of the nation’s most well-known chefs, there are many superb places to discover.

Jamie Oliver famously opened his Mediterranean restaurant, Fifteen, to introduce a pioneering apprentice programme to give young people a fresh start in life and learn new skills, while also producing great food as shown in the 2002 TV series. Laid-back with a quirky atmosphere, it is worth a visit. Famous for his fiery temper and passion for food, Gordon Ramsay is one of the most talked about chefs in England and in the US. However, the quality of his culinary skill has earned him three Michelin stars with exquisite French-style menus and elegant surroundings in his restaurants, such as his establishment in Chelsea. La Gavroche was opened by the Roux Brothers in 1967 and is still at the top of its game. Now run by Michel Roux Junior, it holds two Michelin stars and delicious food complimented with a wine list of some 6,000 wines. Marco Pierre White, Gary Rhodes, Marcus Wareing, Thomasina Wiers…. the list of excellent chefs in London goes on and on.

For those visitors looking for a more quirky dining-out experience while staying in a London accommodation, Gilgamesh, the extravagant Asian restaurant in the ornate building designed in the style of a Babylonian palace will certainly keep you entertained.

If Thai food is your choice, there are many restaurants to choose from, not least the Blue Elephant in Fulham, complete with bridge over a lily pond and the Blue Bar made from a sole tree trunk. Hakkasan is a Michelin star Chinese restaurant – not only serving outstanding food, it has a distinct night-club vibe with low-lighting and discrete tables. Are you after a little opulence? Look no further than Pearl, named after the million hand-strung pearl decorations hung in the restaurant, for an award-winning French menu.

This is but a flavour of the wealth of restaurants in London. Wherever you are staying in your hotel or holiday apartments in London has something to tempt you. 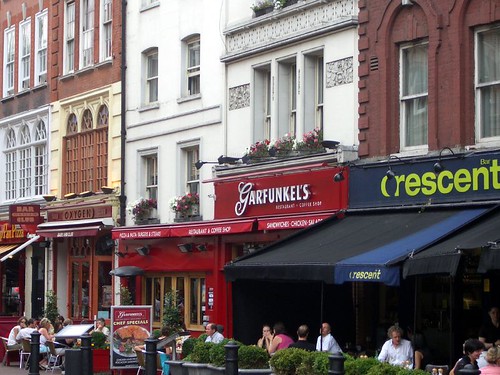 As you look around the vicinity of your central London hotel, it may surprise you how many eateries are around. If you are in the West End, you will find excellent value menus for pre-show and also after performances, along Shaftesbury Avenue, Covent Garden and around Leicester Square. Try one of the cafes, restaurants or high-class dining experiences in the establishments along the River Thames with excellent river views. Chinatown is lively and full of excellent value food, the City has swanky bars and chic eateries… The choice is all yours.