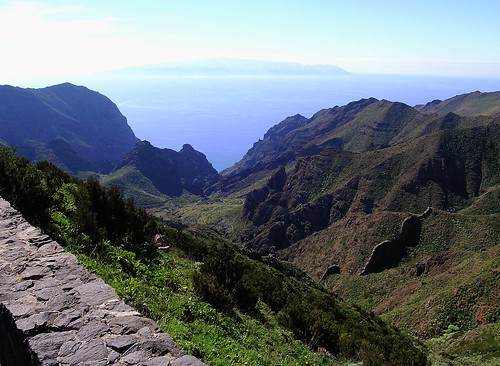 Tenerife is a popular tourist destination.  Of that, there is little doubt.  Indeed, since its boom in the 1980s and subsequent slow decline, Tene-grief has reemerged as a premier holiday destination.  Its beaches have been cleansed, golf courses preened, and the formally glorious Tenerife hotels have been restored to their shining best.

Having shaken off its former stigma, there has never been a better time to head to Tenerife and see what all the hullabaloo is about.  But wait!  You don’t need to don the speedos and glow-sticks just yet.  Here are some less conventional things to do on your next visit to Spain’s biggest Canary Island…

If you like the feel of wind in your hair, the joyous abandon of being on the move, and you don’t mind looking like an OAP on a mobility scooter, you’d probably be interested in Segway Sports, a novel way to explore Tenerife.

The experience begins with an opportunity for you to get acquainted with your Segway; a surreal experience, yet easy enough to master.  These futuristic beasts of burden are designed to keep their loads on, not throw them off, which means, somewhat ironically, the most difficult part of using a Segway is often simply getting on and off, which can be the source of mild embarrassment.

Once you’ve built some confidence on your Segway, it’s time to cruise the sun-scorched streets in style (or as stylish as you can be while standing still on a crawling platform).  As tempting as it may be to ride off into the sunset with your Segway, DON’T DO IT!  These modern mobility scooters have a maximum speed of 12.5 miles an hour, and can just about do 24 miles on one charge of electricity, which means you’ll have a task on your hands when trying to evade capture.

If you thought banana boats were still the ultimate adventure water sport, you’d be wrong; OWH Marine Racing is not an entirely new concept, but it sure is fun.  Once hyperbole is placed aside, it is essentially a very fast way of getting from A to B across water, while incorporating a few added tourist favourites along the way.  In short, it is the perfect activity for adrenaline junkie holidaymakers.

Capable of skipping across the water at speeds of up to 60mph, OWH Marine Racing bills itself as the nautical Formula One (although they conveniently ignore the lack of competition, along with the existence of a number of boat racing tournaments involving vastly superior crafts to their own).  However, these boating trips also include encounters with dolphins, explorations of remote shoreline caves, and the chance to take a refreshing swim in the Atlantic Ocean before enjoying a cold drink and taking in Tenerife’s stunning scenery.  What is there to complain about?

If you’re bored of seeing Tenerife from the ground, why not head up into the mountains and throw yourself off a cliff?  With a parachute on, of course; did I forget to mention that?

Tenerife Paragliding takes its customers to a height of 3,200, straps them to a parachute and an experienced paraglider, and tells them to run as fast as they possibly can.  All going well, the parachute catches the wind and instead of a helpless tourist plunging to their death, they glide effortlessly into the sky, where they gain a fantastic view of Tenerife and the vast Atlantic Ocean below.

Be warned, if a faulty parachute doesn’t bring you back to earth with a crash, the price certainly will.  It costs roughly £129 (EUR 150/$210) for a half hour in the air, which, although guaranteed to leave you gagging for more, is a hefty price to pay.

Tenerife still boasts some of the best accommodation in the Canary Islands, and, with so many interesting activities beyond its beaches and bars to keep visitors occupied, it seems unlikely that the island will fall back into its sordid old habits any time soon.  Take the chance to visit before the rest of the world catches on!

For more information on hotels in Tenerife, click here.