“My velvet escape travel tip” is a guest series about what the name ‘Velvet Escape’ evokes and what that would be in the hometown or favourite place of the guest writer. With this series, I hope to uncover travel tips from places around the world to help visitors have a truly local experience. Today’s guest post is by Dan Martin who writes about his experiences in Malawi whilst on his cycling tour from London to Cape Town. 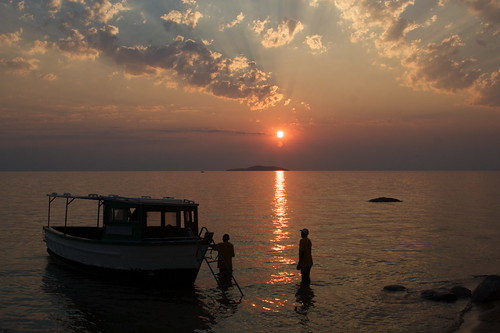 Malawi is an incredible place. It’s one of the world’s poorest countries and is completely dominated geographically by Lake Malawi which runs the length of it’s western border.

I arrived in Malawi a wreck. I was 25 and was cycling from London to Cape Town. I’d done pretty well. I’d sorted visas and planned routes but just before I’d arrived in Malawi, I’d spent a week not being able to get more than a few metres away from the toilet. I’d drunk the local water and eaten local food throughout the trip and had largely been fine but here it decided to catch me out. Doctors conclusion – I had amoebic dysentery and needed medication and rest.

After a week of hellish toilet bound ‘rest’ in Mbeya, a dusty town in Tanzania near the border with Malawi, I was irritable and eager to get moving. Sadly my body was drained (I’d lost 12 kilogrammes in 6 days) so I couldn’t do my usual 100 mile long days.

a slow cruise through paradise

I looked at the map and spoke to a few local guys and worked out that there was a town or lodge every 50 kilometres or so down the length of Lake Malawi and this is how I came to start a slow cruise through paradise.

I rolled into Nkharta Bay, a tiny tourism based town in the north of Malawi-this was my first glimpse of this stunning lake that would accompany and heal me over the next week.

I hauled my bike and myself through the crowds or hotel touts and out on a perilous patchy road to a guesthouse that had been recommended to me called the Butterfly Lodge. Now, if there’s a better example of Swiss Family Robinson style paradise then I’ve not seen it! It’s out the way of the hub-bub of town and is perched on the face of a cliff winding down to a few lovely lonely buildings sticking out on stilts on the lake. There’s a shallow bay where swimming and snorkelling can eat up days and soothe away all ills. It’s swamped in lush gardens and has a breakfast terrace that begs you to spend hours aimlessly staring out over the bay.

I tore myself away against my better judgement and rolled out and on another 50 kilometres down the lake, each night stopping in mellow guesthouses and chilled beach lodges. Kande Beach had a bit of a reputation as a party place and as I turned off the main road I was a little reticent – I was feeling much better but I wasn’t sure whether I was ready to take on a truck load of overlanders!

Kande Beach is about a 5km ride down a sand track of varying quality but the diversion is well worth it. It’s a large wooden thatched compound perched right on the beach. It’s set up for the big overland trucks but they welcomed me in with open arms. There were two trucks in that night but they were easily avoided. I chatted with the other guests and the staff and I swam for ages in the lake (until I thought I saw a hippo and then panicked and headed in!), I played some pool and sat down for dinner. The food was incredible – possibly the best home made pasta carbonara I’ve ever had and almost certainly the next morning they brought the most appreciated full English breakfast of my life! My plan was to only stay for one night but I got lured in by beer, food and decent company. I went on a horse ride during the day but now that I finally had set some time aside for a day off, my body seemed to demand the maximum amount of sleep possible! It was an incredible spot to slumber through the midday heat, to feel the gentle breeze or waking up to see the sunset light up the lake before the fires were lit in the bar and the sound of excited travel talk filled the air.

Malawi was just the tonic I needed. If I was a doctor I’d prescribe slow bike rides down Lake Malawi to all my patients.

Dan Martin cycled from London to Cape Town via the Middle East and the east coast of Africa in 2005-2006 and from Korea to Cape Town via the Axis of Evil and the west coast of Africa in 2007-2008. He is currently training for the Global Triathlon – a 3500miles swim from New York to France, an 8000mile cycle from France to Fairbanks, Alaska and a 5500mile run from Fairbanks to New York.