My hometown, Amsterdam, with its rings of canals, historic monuments, world-class museums and vibrant nightlife is one of the most visited cities in the world. Amsterdam’s world famous canals offer visitors a unique window into the history of the city and the lifestyle of its inhabitants.

The canals of Amsterdam 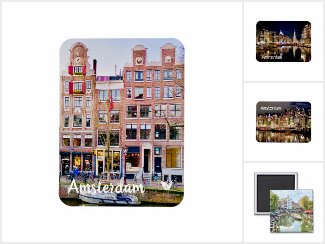 In the 17th century, Amsterdam was one of the wealthiest cities in the world. Ships from its port sailed the world over and formed a powerful global trading network. It was during this time that the ‘grachten-gordel’ (a girdle of concentric canals; ‘gracht’ = canal) was created and the city’s richest merchants built their stately canalside mansions.

Today, this girdle of canals forms one of the city’s greatest attractions. Lined with beautiful 17th and 18th century houses, and crossed by hundreds of bridges, the canals are a gorgeous sight and a focal point for Amsterdammers, many of whom take to their boats for a leisurely cruise or sit at one of the many canal-side cafés when the weather permits. Needless to say, these are two of my favourite ‘velvet escapes’ in Amsterdam! 🙂

If you’re visiting Amsterdam for the first time, a canal cruise should be on your list of things to do as it simply is the best way to quickly get acquainted with the city, its history and its architecture. Many companies offer canalboat tours which cover the Ij harbour, the Golden Bend at the Herengracht (Gentlemen’s canal) – site of some of the most impressive canalside mansions, the Reguliersgracht with its seven bridges, and the Amstel river. Some companies also include the canals of the Wallen (the oldest part of Amsterdam and site of the city’s world famous red light district) and the quaint canals of the Jordaan. Canal cruises leave from various points around the city such as the Central Station and vary in length (1 – 2 hours).

Another way to explore the canals is by buying a ticket for the Canal Bus. The hop-on, hop-off Canal Bus stops at strategic points around the city centre and is a great way to see the sights and enjoy a scenic cruise. An alternative method is to rent a Canal Bike. This method allows you to get a great workout while you enjoy the sights!

Romance on the canals

For a truly romantic experience, book one of the evening cruises, especially in the spring/summer season when the atmosphere is truly mesmerising. Most evening cruises include a cheese platter and wine while some serve a full dinner on board.

An even more delightful way to explore the Amsterdam canals is to hire a boat for a few hours. Pack a basketful of food and wine, and a map. Then navigate yourself through the network of canals – hiring a boat provides you with a great opportunity to explore the charming nooks and corners of this city, such as the Jordaan neighbourhood, the ‘tunnel of love’ between the Flower Market and the Amstel River, and the wonderfully atmospheric canals between the City Hall and the Wallen. The best time to do this is in the late-afternoons and early-evenings, especially in the warm late-spring and summer months. Bring a warm jacket or blanket for those chilly evenings.

Suggested routes for a boat trip along the canals of Amsterdam

Have a look at the map below for various suggested routes (if you opt to rent a boat) through the historic centre. There are a variety of boat hire companies in Amsterdam. Simply Google “Amsterdam boat hire” to find them. Enjoy!

The canals of Amsterdam are also the decor of one of the city’s biggest annual events: the Gay Pride Canal Parade. Held on the first Saturday of August each year, the spectacular boat parade follows the Prinsengracht (the longest of the concentric canals in the historic centre) to the Amstel River, and often attracts hundreds of thousands of spectators from around the world.

Stay on a canal

For the ultimate canal experience, I recommend a stay in a houseboat on one of the canals. My favourite is the 2 Houseboat Suites (Booking.com) on the Prinsengracht canal. There are just two suites: Rembrandt and Van Gogh. In addition to the lovely hosts and a fantastic location in the historic city centre, this newly-built boat has large windows, a comfortable bed and all the amenities that will make your stay comfortable, such as an en-suite bathroom, heated floors, a Nespresso coffee-maker and mini-bar.