Gdańsk (map) is a port city in northern Poland on the Baltic coast. The city’s rich and often tumultuous history, influenced by centuries of foreign trade and a tug-of-war between Poland and Germany, shaped its distinct heritage, making Gdańsk somewhat of an anomaly, compared to other Polish cities. It’s this history and heritage that makes Gdańsk such a fascinating city to visit, with many things to see and do. I spent four days exploring Gdańsk and discovered a multi-faceted city with an intriguing past, extraordinary architecture and a delightful array of restaurants and bars. Here are my recommended things to do in Gdansk:

Things to do in Gdansk

1. Stroll around the Old Town

The Old Town of Gdańsk is most visitors’ first stop and base. The historic centre is very compact, making it easy to stroll around and visit all the major sights. Though the centre was almost entirely destroyed during World War II, the houses and historic monuments have been lovingly re-built. If you’ve been to Amsterdam before, you may notice similarities in the architectural style. There’s an intriguing reason for that! Find out the reason in my post about the architecture of the Old Town of Gdańsk.

My suggestion is to start at the Golden Gate and walk down Ulica Długa (Long Street) and the Długi Targ (Long Market), part of the Royal Way which the King of Poland would take whenever he visited Gdańsk. You’ll pass gorgeous rows of houses and historic monuments such as the Artusa Court, Neptune Fountain and the City Hall with its iconic clock tower. When you hit the Green Gate, turn left and continue along the waterfront. You’ll pass many restaurants and cafés and the Martitime Museum, including one of the city’s icons: the Crane, a remnant of Gdańsk’s rich trading past.

From here, take any of the pedestrian tunnels on the left and explore more of the Old Town. Look out for the 15th century St. Mary’s Church, reputedly the largest brick church in the world. It’s possible to climb the tower – it’s 400+ steps to the top but the views are worth the effort. Other interesting streets to explore include Piwna Street (with its many restaurants and bars) and the wonderfully old-world Mariacka Street (packed with antique and jewellery shops).

I also suggest walking to the 13th century St. Catherine’s Church (the city’s oldest church), the nearby Great Mill (built in the 14th century, it was the biggest mill in medieval times) and the bustling Market Hall.

2. Learn about the history of Gdańsk

Gdańsk was founded by Mieszko I, a Polish duke, in the 10th century A.D.. From then on, the settlement grew into a wealthy and powerful trading city due to its strategic location between Northern and Western Europe, and its ties to the Hanseatic League, an alliance of influential merchant guilds and their trading cities in Germany, the Netherlands and the Baltic region. The city experienced centuries of struggle between the Germans and Polish that lasted till the end of World War II, with brief spells of autonomy during the Napoleonic era and after World War I. During World War II, about 90% of the city was destroyed.


3. Soak up the atmosphere in Mariacka street

The Mariacka Street is close to St. Mary’s Church. Heavily bombed during World War II, the houses were beautifully rebuilt in accordance with old documents and photographs. They did a remarkable job as the street exudes a unique old-world feel, making it one of the most atmospheric streets in Gdańsk. The street is lined with many antique and jewellery shops, ideal for browsing and some shopping as you soak up the atmosphere.

Gdańsk has many intriguing (and quirky) bars and cafés. There are quite a few in Piwna street, such as Jozef K., No To Tick and Flisak 76. Drop by for a drink, a chat with the locals and other visitors and enjoy the cool interiors. For an extraordinary experience, go party in Bunkier, a five-storey building that was built as an air-raid shelter! Read more about my recommended bars in Gdańsk.

Vodka is firmly rooted in Polish culture and a visit to one of the bars wouldn’t be complete without a vodka-tasting. Some Polish vodkas to try include Czysta (clear), Cytrynowka (lemon), Wisniowka (flavoured with cherries), Pieprzowka (pepper) and my favourite, Zubrowka (‘bison grass vodka’, which is flavoured with grass from the Bialowieza Forest). Drop by at a bar such as Jozef K. (Piwna street), Pijalnia Wodki i Piwa (Long Market) or No To Tick (Piwna street) to try some of the vodkas on offer or join a vodka tasting tour.

Gdańsk has a brewing history that goes back to the 16th century. Piwna street literally translates as ‘beer street’ and for centuries, this street was called Jopengasse in reference to the Jopen brew. In the past decade, several microbreweries have popped up in Gdańsk. If you’re into discovering local brews, your first stop should be Brovarnia (in the Gdańsk Hotel). Other microbreweries include Browar Piwna (in Piwna street) and Browar Lubrow (opposite the train station). 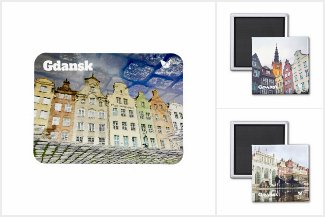 Learn about Gdańsk’s maritime history by joining a leisurely cruise to Westerplatte on the Baltic coast. The cruises leave from the waterfront near the historic Crane and you can choose a mock pirate ship for your cruise!

There are various museums in Gdańsk that are absolutely worth a visit. In addition to the Historical Museum of Gdańsk (mentioned above), I can highly recommend the Museum of World War II and the European Solidarity Centre. The latter, one of Gdańsk’s top attractions, is located outside the Old Town in an impressive rust-coloured building and presents Poland’s post-war history and Gdańsk’s prominent role.

8. Have a delicious baked potato!

My first meal in Gdańsk was a local favourite: a baked jacket potato filled with herring and topped with a spicy sauce at Bar Pod Ryba (in Piwna street). They serve many variations of the baked potato, with different fillings and toppings. If you love potatoes, you’ll love this restaurant!

Other restaurants I visited which I can recommend include Mono (Piwna street), Zafishowani (a seafood restaurant along the waterfront) and Brovarnia (a brewery/restaurant in the Gdańsk Hotel).

Sopot is a beach town about a 20-minute train ride from Gdańsk. Locals come here for its wide sandy beaches, shops, nightlife and a stroll along the Sopot Pier, Europe’s longest wooden pier (515 metres). As you walk down the main street, Monte Cassino, look out for the ‘crooked house! It’s a lovely stroll along the pier and when you return, venture off into the neighbourhood behind the Grand Hotel to admire the beautiful tree-lined streets with their stately villas.

Marlbork Castle is considered as one of the greatest architectural attractions in Poland. Built between the 13th and 15th centuries by the Teutonic Knights, Marlbork Castle is also the world’s largest castle (by land area). Designated a UNESCO World Heritage site, Marlbork Castle is famous for its impressive fortifications and brick Gothic details. The castle is easily reachable by train from Gdańsk (about 50 minutes) or you can join a private tour from Gdańsk for a half-day tour.

Gdansk is a year-round destination with an international airport. I flew direct to Gdansk from Amsterdam with KLM. There are also many (low-cost) options to other parts of Europe with Easyjet and Ryanair. The modern Lech Walesa Airport is about a 20-minute drive from the city centre (approximately EUR 20+ by taxi). The currency used is the Polish zloty and there are many ATMs spread out across the city. The city centre is very compact, making it very easy to walk around to enjoy the sights. You can also opt to join a tour to see Gdansk and its surroundings.

I stayed at the modern Hotel Mercure Gdansk Stare Miasto, which is located on the edge of the Old Town. The rooms are comfortable and the breakfasts are elaborate. The main attractions in the Old Town are located just minutes away on foot. Bunkier is a 4-minute walk away whilst the bars at Piwna street are about a 10-minute walk.

Note: my visit to Gdansk was made possible by Polen Toerisme. As always, all opinions expressed above are mine, and mine only.