This ancient Roman city was buried under tonnes of ash after a catastrophic eruption of nearby Mount Vesuvius in AD 79. Today, it is a UNESCO World Heritage Site and one of Italy’s major tourist spots, attracting millions of visitors each year. The ruins cover a large area and are certainly worth exploring as there’s lots to see in Pompeii.

A stroll around Pompeii

Pompeii’s (map) well-known history certainly plays on the mind during a stroll around. The opulent villas, gorgeous fountains and broad, paved streets are testament to its prosperous past, but it’s the faces that tell the story. The faces on the fountains, the frescoes and the statues provide clues to the city’s lavish, some would say hedonistic, lifestyle.

However, the events of those horrific days in AD 79, brought everything to an abrupt end. On a walk around the city, with the constant presence of Mount Vesuvius in the background, one can’t help but sense that feeling of impending doom. 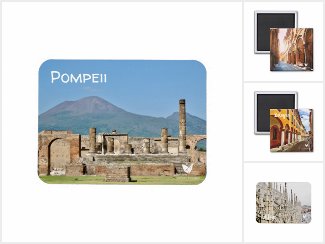 AD: Looking for a cheap (up to 8x cheaper than high street banks), transparent and fast way to send money abroad? I use Transferwise and can highly recommend it!

The most impressive section is undoubtedly the collection of pottery and other artefacts as well as plaster casts of the citizens of Pompeii and their pets who were buried alive as they tried to escape. It is absolutely remarkable how archeologists discovered voids in the ash layers and realised that these were in fact spaces left by decomposed bodies. By injecting plaster into these voids, they were able to recreate the forms of the people in hunched or foetal positions as they tried to shield themselves from the ash. The shapes are so real that in some cases, traces of the terrified expressions on their faces can still be seen. The contrast between the proud facial expressions on the statues and frescoes, and the horrified looks on the faces of the plaster casts couldn’t be any more stark.

The brothel in Pompeii

Before my trip to Pompeii, I read an amazing thriller called “Pompeii”. Written by Robert Harris, Pompeii: A Novel

is full of suspense and provides an insightful account of the Roman lifestyle and the eruption that destroyed the city. Though the book is fiction, the vivid descriptions of Pompeii during its final days certainly helped me appreciate the sights as I explored the ruins of this fascinating city.

Pompeii is located within the city limits of Naples but is also close to other popular holiday destinations such as Sorrento, Amalfi and Positano on the Amalfi Coast, and Capri (a short boat-ride away).