Jerash (or Gerasa) is an ancient city in Jordan located 48km (30 miles) north of the capital, Amman (map). Famous as being one of the best preserved Greco-Roman cities in the Middle East, Jerash is one of the top attractions in Jordan (alongside Petra) and is certainly a must-visit. During my visit, I strolled around the city in awe as I passed amazing, 2,000 year-old structures and grand avenues. I discovered many things to see in Jerash such as Hadrian’s Arch, the Temple of Artemis, the Oval Forum and the countless columns with their intricate Corinthian capitals. As most of the main touristic sights in Jordan are south of the capital Amman, many people have asked me if it’s worth visiting Jerash in the north. My answer is a resounding YES!

A brief history of Jerash

The city can trace its origins back to the Neolithic period (7500 – 5500 BC). It became a Hellenistic city in the 2nd century BC when a general of Alexander the Great seized the eastern reaches of the vast empire. Over the centuries, Jerash grew into an important trading hub on the King’s Highway, an ancient trade route that connected Egypt with the Red Sea, Philadelphia (now known as Amman) and Damascus. In the 1st century BC, Jerash was annexed by the expanding Roman Empire. As the Roman Empire exerted its presence throughout the region, Jerash experienced a long era of great wealth. Many of the structures that can be seen today, such as the Arch of Hadrian, were built during this prosperous period. In 749 AD, a massive earthquake destroyed much of the city and it never regained its prominence.

The ruins were discovered by the German explorer Ulrich Jasper Seetzen in 1806 and the excavation of the ancient city has been almost continuous since the 1920’s. Jerash is nowadays one of the most popular places to visit in Jordan alongside Petra, Wadi Rum and the Dead Sea. Its proximity to Amman, about a one-hour drive, makes it an easy day trip.


Things to see in Jerash

Jerash experienced a building boom during the Roman era as it established itself as a regional centre of trade, commerce and culture. The city utilised its great wealth to build impressive structures and avenues. Much of this was destroyed during the 749 AD earthquake but over the years, archaeologists have painstakingly restored the main structures, making a stroll around Jerash a wondrous journey of discovery. Here are the top sights in Jerash which shouldn’t be missed: 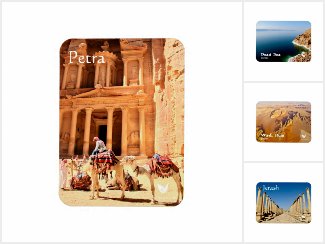 Jerash can easily be seen in a day but I recommend taking your time to stroll around the site. Wear comfortable walking shoes and a cap (it can get very hot in the summer) and bring sufficient water.

Located northwest of Jerash near the border with Syria and Israel, Umm Qais (map) is home to another ancient city, Gadara, which shares a somewhat similar history with Jerash. This Greco-Roman city makes for a nice add-on to a visit to Jerash (only if you have the time for it). At Gadara, you’ll find unique basalt columns, an amphitheatre and other stone buildings from the Roman period. From here, you’ll also have panoramic views of the Golan Heights and the Sea of Galilee at the Jordan/Israel/Syria border.