The Millau Viaduct in southern France is the tallest bridge structure in the world and ranked high on my bucket list since its completion in 2004. Located on the A75 highway (map) linking Paris with Montpellier, the bridge is nothing short of an engineering marvel! Designed by Sir Norman Foster and constructed by a French consortium, its tallest mast is 336m (that’s taller than the Eiffel Tower!) and its road deck is suspended 270m or 890ft above the valley floor! I’d seen it numerous times before on flights from Amsterdam to Spain, and even from that height (±10,000m), it looked simply spectacular. On my recent trip to the Languedoc region, I knew that this would be my best opportunity to visit the Millau Viaduct. I saw it from the plane window again on the flight to Montpellier and I was excited to get a closer look!

My visit to the Millau Viaduct

The Millau Viaduct is a highlight for motorists travelling to/from the south of France on the A75 highway. The visitor centre and observation deck on the northern end of the bridge is a popular stop.

Approaching from the south on the A75, my plan was to drive to the town of Millau (map), wander around the town and have lunch, then continue on the D41 road along the Tarn River to the base of the bridge. According to Google Maps, there’s a winding road that branches off the D41 and leads up to the Millau Viaduct visitor centre. After a stop there, I would then drive on the bridge in a southerly direction, making a nice loop and ensuring I had the best views of the Millau Viaduct from both the valley floor and from the top.

As we approached Millau on the D809 road, we stopped at a viewpoint which offered a panoramic view of the town, the Tarn Valley and the Millau Viaduct in the distance.

A quick stop in Millau

Millau, situated on the banks of the Tarn River, turned out to be a charming town. We strolled around its quiet streets and grabbed a bite at the Place Maréchal Foch (square). At the square was a beautiful church called the Église Notre-Dame de L’Espinasse, which we visited.

From Millau, we continued along the D41 road, which follows the path of the Tarn River. I got very excited when we caught the first glimpse of the bridge. My excitement grew as we reached the base of the tallest mast. Towering high above me, the bridge certainly looked impressive but I especially loved its sleek, elegant design.

A few moments later, my heart sank when I saw that the road leading up to the visitor centre was closed. Sadly, there was nothing else to do but turn around. The closure of that road – I have no idea why it’s closed and if it’s permanent – makes it very cumbersome to see the bridge from both the valley floor and the top as it means adding an extra 50-60km to the trip.

We crossed a bridge, where we stopped, that offered spectacular views of the Millau Viaduct and the crystal-clear Tarn River. That view was truly phenomenal!

From here, we slowly made our way back to Millau and took the same (long) way back along the D809 road to the A75 highway. We passed another viewpoint where we made a quick photo stop. 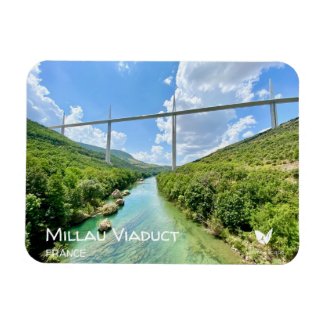 As we approached the A75, we noticed a turn-off to a place called La Cavalerie (map). It sounded intriguing so we headed there instead. It turned out to be a village that was founded by the Knights Templar (!!) and is composed of a walled settlement with imposing towers and gates. We strolled around the village and the fortifications, and treated ourselves to some delicious crepes. It was a lovely, somewhat unexpected diversion.

It was disappointing not to visit the Millau Viaduct visitor centre and see the bridge from the observation deck but the views from the valley floor were absolutely spectacular. I later read some of the reviews by those who had driven across the bridge and it turns out that you don’t have much of a view due to the safety/sound barriers along the length of the bridge, so that was somewhat comforting. Haha! Here’s the view from the observation deck which I found on Wikipedia:

Seeing the Millau Viaduct up close sure was a (little) dream come true though, and I definitely recommend it if you’re in the area.

Read more about things to do in Montpellier.