As someone living in the Netherlands, a country that’s famous the world over for its windmills, I’m naturally intrigued every time I stumble across these wonderful machines anywhere in the world. During my trip to the region of Castilla-La Mancha in central Spain, I visited the beautiful windmills of Consuegra (map). Located about 60km from Toledo, Consuegra is a lovely historic town set against a range of low mountains. Twelve windmills can be found atop the Cerro Calderico ridge, along with a striking 12th century castle. Fans of the Spanish writer, Cervantes, will instantly recognise these windmills, which were prominently featured as the ‘giants’ in the ‘Don Quixote’ novel. Standing proudly atop the ridge, with their white cylindrical towers and blue, pointed roofs, I can imagine why Cervantes felt so inspired by them!

It’s not entirely clear when the windmills of Consuegra were built but they became famous when Don Quixote was published in the 16th century. According to local tradition, the windmills, used primarily to grind grain, were passed from father to son for many generations before being ‘retired’ in the 1980’s. The windmills have since been lovingly restored. One of them houses a gift shop while another is a small museum. There’s even a working mill so visitors can see how it works. Check at the tourist office for Don Quixote themed guided tours.

You can hike up to the windmills from the town or you can drive up to the ridge (there’s free parking). Whichever way you choose, you’ll be rewarded with panoramic views of the semi-arid plains of La Mancha and the gentle hills that stretch into the horizon. Along the way to or from the windmills, be sure to stop at the La Muela or Consuegra Castle. Originally built by the Arabs (possibly in the 10th century), the castle was modified and expanded in the 12th century by the Order of Saint John of Jerusalem. The windmills and the castle combine to create a unique medieval atmosphere, something which won’t easily go unnoticed. 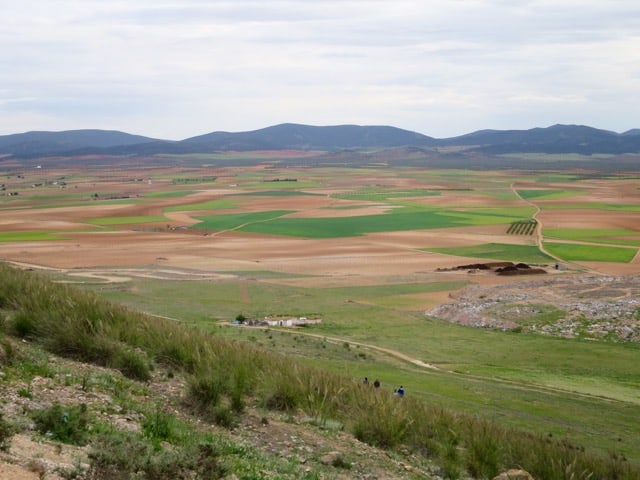 Drop by in Consuegra

I also recommend a stroll around Consuegra. These days, the town is famous for its high-quality saffron and its annual Rose of Saffron Festival. Drop by at the beautiful town square (Plaza de España) and its 17th century Renaissance-style Town Hall. You can also find several gorgeous churches in the Mudéjar style (a blend of Moorish/Arab and Gothic influences).

At a corner of the square, you’ll find Café La Antigua, which serves a terrific saffron-infused gin & tonic! It’s also a great place to mingle with the locals and taste some local specialties.

Consuegra can be visited as a day-trip from Toledo or Madrid. If you’re a fan of Cervantes, check out the Windmills and Don Quixote route which winds its way around the La Mancha region.

Search for hotels in Consuegra (Booking.com).

Note: my trip to La Mancha was part of the #inLaMancha blogger project, a collaboration between iambassador and the Spain National Tourist Board. As always, all views expressed above are mine, and mine only.