The road unfurls like black ribbon through eucalyptus hills; I have the windows rolled down and the radio turned off. The only sounds heard are my soft tires hissing at the wet asphalt and the symphonic chirps of coqui tree frogs. The air is still damp after a brief rain shower, but the cloud cover has lassoed in the remaining heat of the surrendering sun: it’s the ideal kind of temperature, the kind you can’t feel on your skin. It’s the perfect time of day—found only in minute increments—and it begs to be replayed daily in the hills behind Kailua-Kona, Hawaii.

After I pull up to the front lobby at Holualoa Inn, I’m greeted by Noi (whose full name means (appropriately) heaven’s mist in the local Hawaiian language), and she’s carrying a tray with a cool towel and a glass of mango nectar. The sign in front of the mansion asks guests to remove their shoes, but I’ve already done so: the exquisite hardwood floor is flawless and pristine, and I feel guilty about even leaving my footprints on its surface. It’s like walking in an art museum, and one of its exhibits is the ground. But despite my careful reverence, I feel supremely at home here. I feel like more than a guest.

Within thirty minutes of arriving, I’m taking a tour of the grounds in a golfcart-on-steroids with Brian, one of the chefs at Holualoa Inn. He’s a renaissance man in a torn t-shirt, and I like him immediately. As we bumble over volcanic rocks towards the inn’s chicken coop and newly-finished breakfast patio, he tells me about his upbringing on the California coast, his local reggae band, and how he learned to cook: “I’m number eight in a family of nine boys, and my younger twin brother and I had to fight our older brothers for dinner every night,” he laughs at the memory, his eyes chuckling the way men do when recalling boyhood idiosyncrasies: “I taught myself to cook so that my brother and I could eat.” His practice carried forward into adulthood, his creations evolving and flowering with each new ingredient in his quiver. His arrival in Hawaii, consequently, was met with an explosion in culinary experimentation.

Brian’s story of necessity and creativity are, perhaps, essential to a more thorough understanding the Holualoa Inn. Hawaii’s Big Island itself is a leading example of self-sustainence, and the Holualoa Inn reflects that spirit in its own microcosms: over 5,000 Kona coffee trees grow on the 30-acre estate, and a handful of nurseries and orchards present a variety of fruits and vegetables to ensure that every delicacy served to guests were grown and harvested onsite. The newly-constructed pavilion area offers additional event space for everything from destination weddings to business retreats, but the emphasis on community remains the same.

While the six-room bed & breakfast is relatively new to the scene, the owner, Cassandra Hazen, has had her professional career steeped in hospitality and luxury, and the Holualoa Inn is one of her crowning achievements. For her, part of the allure of the estate was the land it sat on: once part of the Hawaiian royalty’s sled run (used for both local economy and cultural celebrations), a portion of the land is protected by the state of Hawaii. The mansion itself, completed in the early 1970s by a local media baron, held no original aspirations of becoming a bed & breakfast—a feature that underscores its authentic aloha atmosphere.

Each of the six rooms in the inn are supremely unique and have their own signature amenities and quirks—the flagship Gardenia Suite, for instance, tops the mansion with a perfect 180-degree panorama of the coast, and boasts a sunlit reading room with two west-facing walls of windows. The Ginger Room, situated nearby, offers its guests a private balcony overlooking the grounds and quick access to the rooftop gazebo outside. My room in the Plumeria Suite, however, is tucked underneath the mansion alongside the swimming pool, adjacent to the daytime lounge.

As a solo traveler and bachelor extraordinaire, I make an attempt to settle into the rhythm of each of the common areas in the mansion, but they all scorn urgency and rush and force me to focus almost exclusively on the main living room, the snack table (my favorite sub-destination), and a self-guided tour of the garden. I wasn’t able to capitalize on the couples-only massage gazebo or his-and-hers activity sessions, but even in this destination b&b made for couples, I slept sound and kept rested — much like I do at home. 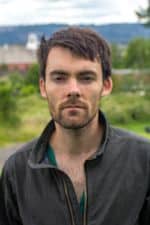 Zak Erving grew up snowboarding in Alaska, but has since relocated to the surf breaks north of Los Angeles. He is fascinated with movement and travel (his first foray into human flight was at the age of six), and he writes at Sparkpunk to document, share, and inspire.