Amsterdam, with its rings of canals and many historic monuments, is arguably one of the most photogenic cities in the world. I’ve listed below ten beautiful Amsterdam photo spots for visitors and photography enthusiasts. The city centre is very compact, making it very easy to explore by foot. I’ve pinned these photo spots on the Amsterdam map below:

There are many photo opportunities along the banks of the Amstel river, both in the city centre and south of Amsterdam (outside the city limits). In the city centre, one of my favourite spots is on the Blauwbrug (Blue Bridge) near the City Hall. Both sides of the bridge offer beautiful views – the northern side has views of the City Hall and some of the beautiful historic houses which line the Binnen Amstel; while the southern side offers a sweeping view of the river, the Hermitage and the Magere Brug (Skinny Bridge), Amsterdam’s most famous bridge.

The Halvemaansbrug (Half Moon Bridge) also offers gorgeous views of the Amstel River and of the Munt Tower, especially in the evenings.

One of the most photogenic spots in Amsterdam. Walk along the Staalstraat (between the City hall and the Kloverniersburgwal) and you’ll cross the Staalmeestersbrug, a drawbridge over the Groenburgwal canal. Stop on the bridge and capture the serenity of the tree-lined canal against the backdrop of the Zuiderkerk (Southern church).

One of the oldest inner courts in Amsterdam, the beguinage (convent) is a very special place where silence is required (if you really have to talk, whisper!). The Begijnhof is located in the heart of the city, just off the hustle and bustle of the Kalverstraat (main shopping street). Once you enter the inner court, you will be struck by the beauty and tranquility of this place. The Begijnhof is arguably one of the best photo spots in Amsterdam but please respect the silence.

Read about things to do in Amsterdam

4. The Jordaan and Nine Streets neighbourhoods

One of my favourite neighbourhoods in Amsterdam, the Jordaan boasts a multitude of interesting shops, art galleries, markets, restaurants and national monuments, amongst which the Anne Frank House. There are some gorgeous views from the bridge at the Bloemgracht/Prinsengracht intersection. Another picturesque location is the Jordaan is  where the three ring canals (Heren-, Keizers- and Prinsengracht) meet the Brouwersgracht.

The Nine Streets neighbourhood straddles the Herengracht, Keizersgracht and Prinsengracht canals. In the Nine Streets neighbourhood, stand on the Berenstraat bridge that crosses the Prinsengracht (canal) for a lovely view of the canal and the Westerkerk (Western church) which has Amsterdam’s highest church tower – is the church tower leaning? The tower is topped by the crown of Maximilian I of Hapsburg, the Holy Roman Emperor in the 16th century.

Walk along the Herengracht in the Nine Streets neighbourhood to admire some of the most beautiful canal houses in Amsterdam.

Or turn around and face the Leidsegracht (south) for some beautiful sunset shots.

Walk along the Keizergracht towards the Utrechtsestraat and Amstel River for more beautiful photo opportunities.

Join a canal cruise for a photo opportunity of this gorgeous scene because you can only see the Seven Bridges that cross the Reguliersgracht from a boat. The best place to capture this scene is at the intersection of the Herengracht / Thorbeckeplein and the Reguliersgracht.

This neighbourhood is definitely one of the most intriguing in Amsterdam. There’s the Waag (the medieval weighing house; a mini-castle-like building), the Wallen (red-light district), the Zeedijk (the heart of Chinatown), and a myriad of restaurants and bars, including several microbreweries. The Waag is definitely worth a few snapshots.

If you’re venturing into the red light districht, do not take pictures of the women in the windows (or risk getting a good yelling at)! A good spot to capture the neon scenes of the district is from the Stoofsteeg bridge that crosses the narrow Ouderzijds Achterburgwal canal. Walk along this street to the next canal, the Oudezijds Voorburgwal. The bridges along this canal have some great views towards the Oude Kerk (Old church) and the Sint Nicolaas Kerk (St. Nicholas church). At the nearby Spooksteeg, you’ll have a unique view of the houses which directly front the canal.

The heart of the historic city centre, the Dam Square houses the Royal Palace, the Nieuwe Kerk and the National Monument. Don’t miss the tour of the Royal Palace – the interior is stunning! The central hall is especially breathtaking. 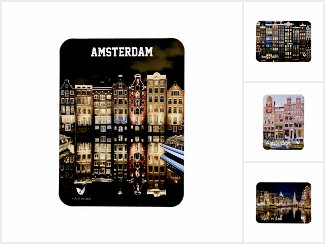 Behind the Royal Palace is one of my favourite buildings in Amsterdam, the Magna Plaza. It used to be the General Post Office and is now a (very unique) shopping mall. In neo-Gothic style, the building boasts striking towers, arches, the odd gargoyle and some magnificent spires. The interior is dominated by the dazzling central hall with its rows of arches and columns. Don’t miss this wonderful photo opportunity.

Perhaps the most iconic view of the Amsterdam canal houses is just a stone’s throw from the Amsterdam Central Station. Walk along the Damrak (on the canal side) for stunning views of a row of historic canal houses. This is arguably one of the most photogenic spots in Amsterdam and attracts many photographers, especially in the evenings when the water is like a glassy mirror.

For something edgier, head for the NDSM Wharf. A 20-minute (free) ferry ride away from the Central Station, NDSM Wharf is an old shipyard that’s been converted into a huge cultural centre. There’s some cool architecture, the amazing STRAAT Street Art Museum and much more for fantastic urban photography opportunities.

For more photos, check out my photos of the Amsterdam canals through the seasons.