Gouda is a historic city in the province of South Holland in the Netherlands. Most tourists visit Gouda to see the cheese market and taste its world-famous cheese. However, on my recent visit, I discovered a good variety of things to see in Gouda.

The city (map), located between the Gouwe and Hollandse Ijssel rivers, can trace its roots back to the 12th century when peat-harvesting was the main economic activity. In the 13th century, a canal was built, linking the Gouwe with the Rhine river in the north. In addition, a harbour was constructed at the confluence of the Gouwe and Hollandse Ijssel rivers south of the settlement. This ushered in an era of prosperity for the city as it became an important shipping route between Flanders and France, and the rest of Holland. These days, Gouda is best known for its cheese, stroopwafels (syrup waffles), its gorgeous 15th century Stadhuis (Old City Hall) and stunning Sint Jan (St. John) Church.

Things to see in Gouda

Gouda is easily reached by car from Amsterdam (1 hour) and Rotterdam (30 minutes) and there are various parking garages located around the historic centre’s outer edges such as Bolwerk and Nieuwe Markt. You can also get to Gouda by train: <1 hour from Amsterdam Central or Schiphol Airport (via Utrecht or Rotterdam), and ±20 minutes from Rotterdam Central. Gouda can also be visited as part of a Central Netherlands road trip. Search for flights to Amsterdam with KLM.

The best way to get to know Gouda is to simply stroll around its picturesque canals and streets. Or you can join a two-hour walking tour of the historic city. Surrounded by canals and the Gouwe and Hollandse Ijssel rivers, the historic centre is a compact island that’s easy to cover on foot.

I parked at the Bolwerk parking garage and embarked on my walk around Gouda, starting at the Gouwe. This stretch of the Gouwe is absolutely gorgeous, with its stately houses, historic sluice and swing bridge.

The 15th century sluice is a reminder of the time when Gouda was the most important transit point for inland shipping routes in Holland. The Crabeth swing bridge was built in the 19th century and is a national monument.

Around the corner, the Turfmarkt canal was a beautiful sight.

Further down the Gouwe, I passed the 15th century St. Joostkapel (chapel) and the Gouwekerk (Gouwe Church). The Gouwe Church was built in a neo-Gothic style. Its red-brick structure and towering steeples certainly are impressive (though it’s best viewed in the winter when the trees are bare).

I soon arrived at the Visbanken (Fish Market), two parallel galleries on either side of the Gouwe. These 16th century galleries, once a vibrant fish trading market, now house alfresco cafés with a lovely view of the Gouwe.

From here, it was a short stroll to the Markt (Market square). This diamond-shaped square is encircled by houses, shops, restaurants and cafés. At its centre, the iconic Stadhuis (Old City Hall) stands proud. This 15th century building, with its striking Gothic façade, is used for weddings and receptions and can be visited.

Located along the perimeter of the Markt is another iconic building: the Goudse Waag. This 17th century weighing house is open to visitors and contains a cheese-making museum and tasting room. This corner of the Markt is also where the Cheese Market is held every Thursday morning in the spring and summer months (currently cancelled due to COVID-19 until further notice).


I stopped for lunch at a restaurant called Viejee’s, which I can definitely recommend. The restaurant serves contemporary sharing plates with a Gouda twist. I had a delicious carpaccio salad with sprinklings of Gouda cheese.

After lunch, I continued on my stroll around the Markt, passing many restaurants and cafés as well as several cheese shops.

My next stop was the Sint Jan (St. John’s) Church, another iconic Gouda landmark. This church turned out to be one of the highlights of my visit to Gouda. A UNESCO Heritage listed monument, the Sint Jan Church was built in the 15th/16th centuries in a Gothic style. With a length of 123 meters, the church is the longest in the Netherlands.

The most striking feature of this church is its stained glass windows which run the entire length of the church! An intriguing fact is that the windows were first financed by Catholic donors, and later Protestants as the church switched denominations halfway through the construction of the windows. This resulted in a fascinating mix of scenes. 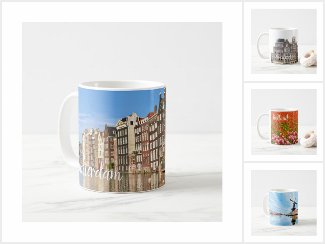 Around the Sint Jan Church

There are several points of interest around the Sint Jan Church. Behind the church is the Gouda Museum which houses a collection of art, pottery and glasswork. The Museum Café is a lovely place to stop for a coffee.

Also behind the church, you’ll find the beautiful Joodspoortje (Jewish Gate), the Jerusalem Chapel and the Oude Weeshuis (Old Orphanage).

I walked towards the Haven (the old harbour) with its high walls on either side. There are many stately houses along the Haven and the view towards the Sint Jan Church was beautiful.

From here, I slowly made my way through quiet neighbourhoods to the Roode Leeuw (‘Red Lion’) windmill. This 18th century flour mill can be visited for a small fee – a guide will show you the inner workings of the mill and you can even purchase its flour.

I truly enjoyed my stroll around Gouda! Aside from the Markt square and Sint Jan Church, I discovered many other things to see in Gouda. I was particularly impressed by the stained glass windows in the Sint Jan Church. One other thing I did before I left Gouda, and can recommend to anyone, is to stock up on cheese (of course) and delicious stroopwafels! I got my stroopwafels at the Kamphuisen Siroopwafelfabriek (Kamphuisen syrup waffle factory) at Markt 69.

For more info about Gouda, visit the tourism office.

Read other Velvet Escape posts about the Netherlands